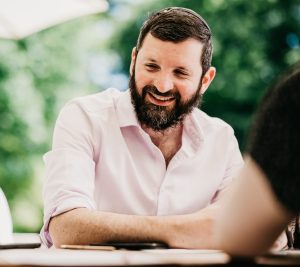 Daniel Saunders is a technologist-turned-investor and an experienced advisor in applied innovation. He has worked with dozens of global industry leaders, identifying and implementing pioneering technologies.

Trained as a software engineer with an MSc in Computer Science, he previously held senior roles at Symbian, acquired by Nokia, and Global Research and Consulting, acquired by ICAP plc. For almost 20 years, Daniel has designed, discovered or integrated the latest technological advances into large complex organisations. Immediately prior to L Marks, Daniel served as Chief of Staff for Economic Development at the Israeli Embassy.  It was during this time that he witnessed the growth of innovation ecosystems and the developed the successful pathways for corporate-startup collaboration.  Through a joint initiative from the UK Prime Minister in 2013, he met Stuart Marks, an established entrepreneur, having built and successfully exited several companies.  It was this encounter that led to the creation of L Marks.

Daniel and Stuart recognised the power of innovation and designed a new process and platform to help large organisations innovate through a frame that delivers measurable results and achieves strategic objectives. They launched their first programme in 2014, partnering British retailer John Lewis and creating the first retail accelerator in the UK. Since then, L Marks has become the most trusted partner for corporate innovation, harnessing Open Innovation and developing New Ventures.

As CEO, Daniel has created and launched more than 80 innovation initiatives in Europe, Asia and North America and is trusted by some of the world’s best-known companies including British Airways, BMW, Lloyd’s of London, and American Electric Power.

Outside of L Marks, he is on the management committee for the local community, serves on the board of an educational trust, and has invested in over 30 early-stage companies. Daniel lives in London with his wife and three children.