United Utilities is the United Kingdom’s largest listed water company and manages the regulated water and waste water network in North West England with a combined population of more than seven million.

In January 2021, we launched our third United Utilities Innovation Lab, building on a successful partnership with the water and wastewater company which goes back to 2017.

Designed to make services safer, faster and cheaper for customers, the 12-week Innovation Lab places enterprising young businesses at the heart of operations at United Utilities headquarters in Warrington, UK. During the programme, these businesses work alongside senior executives to test their solutions in a live environment and explore opportunities for longer-term commercial partnerships. In addition to addressing key business challenges, the Lab provides insight into the breadth of disruptive technologies reshaping the sector while inspiring the sort of entrepreneurial mindset that accelerates progress.

“Interestingly, all the suppliers we are working with would label themselves as small or startup and five of them had never worked with a UK water company before  They all have a completely different energy to a large corporate like United Utilities, which is exactly what you need to disrupt the status quo.”

L Marks’ Scouting Team promoted the Lab to 1500 businesses, making sure to target a diverse range of entrepreneurs, including those based in other countries or working in other sectors. Of the 80 applicants, 22 were invited to present their ideas at Pitch Day, with seven businesses selected to join United Utilities teams at the company headquarters’ Innovation Centre. The teams came from France, Portugal, Canada, Australia, India and the UK with five entering the UK water industry for the first time. 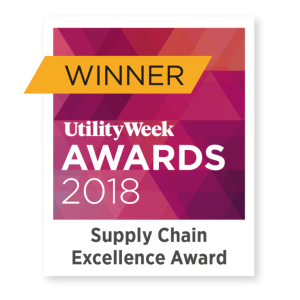 The first two cohorts of the United Utilities Innovation Lab have been incredibly successful, with over 90 United Utilities employees taking part and mentoring the Lab teams, and with 100% of the teams running live trials during the programme, more than half of these leading to Framework Agreements.

In addition, following the first iteration of the programme, the United Utilities Innovation Lab was awarded the “Supply Chain and Excellence Award” at the Utility Week Awards 2018.

The Lab was recognised for making a difference in the way utility companies operate, collaborate and innovate to meet constantly developing consumer demand.  The third cohort of the programme launched in January 2021 and is building on these successes.

Emagin worked closely with United Utilities teams to gain insight into the specific challenges facing the network. The team was able to modify and tailor its standard platform offering, HARVI, with these insights, before running trials using data from the United Utilities network. The pilot trials were rolled out across different business areas in order to assess the live data analysis capabilities. At Demo Day, the team was able to project operational cost savings of over £200k based on one site alone.

It was recognised during the programme that Emagin had allowed United Utilities to achieve a 22% reduction in energy costs in areas where the technology had been trialled. Following the Lab, United Utilities confirmed a commercial agreement with Emagin for a scaled roll-out of HARVI across the network.

With this agreement, United Utilities became the first water company in the UK to introduce large scale artificial intelligence into its operational systems. In December 2019, Emagin was acquired by US company Innovyze.

As featured in WaterWorld Magazine.

FIDO (Free Inserted Data Objects) sees the insertion of three free-floating spheres that travel in any pipe size through the water network, first collecting, then uploading and analysing the data in the cloud using FIDO’s differential analytics algorithm. Analysed data is sent back to the engineer’s phone or tablet clearly identifying pipe anomalies such as leaks (size and location), air pockets and chokes to within one metre.

FIDO joined the Lab with an innovative solution targeting one of UU’s biggest challenges leakage. FIDO iterated their solution multiple times during initial testing and gained the confidence of their sponsor to run a live trial in the network. One key achievement was the development of the FIDO Stick , which enables the use of historical acoustic logger files to develop an algorithm for an automated analysis of the probability of a leak in the network.

United Utilities and FIDO finalised a commercial relationship at the end of the Lab, which will allow for their solution, including the FIDO pucks and FIDO stick, to be tested in the live network and then rolled out. Now in daily usage, FIDO Tech’s leak detection technology has a greater than 85 per cent success rate, improving the rate leaks are found and outperforming traditional leak detection methods.  With FIDO, United Utilities is tracking down three billion litres of lost water.

As featured in BBC News and WTT.

VAPAR helps water utilities speed up the repairs of their underground pipes. VAPAR’s cloud platform automates the fault detection directly from inspection footage of sewer pipes turning a 2 weeks manual process into a 2 minute job. For the duration of the Innovation Lab, VAPAR CTO, Michelle Aguilar relocated from Sydney to Warrington to work together with the United Utilities to help automate fault detection in their 72,000 kilometre sewer network and speed up any repairs.

United Utilities provided VAPAR with a significant dataset to prove and improve the accuracy of VAPAR’s automated defect detection system. This data provided enabled VAPAR to develop and test ways in which the dataset could be curated in a scalable manner, and used to validate the accuracy of our system in accordance with the UK standard, the MSCC (Manual of Sewer Condition Classification). Through this process, VAPAR were able to make improvements to the AI models augmented by UU’s CCTV footage, gain insights on model performance across different datasets, achieve alignment with multiple standards, identify and understand several additional business use cases for the system, understand where our platform could fit into the end to end processes, and what additional capabilities we needed to add to streamline usage.

With the relationship secured with United Utilities, and with AU$490,000 Accelerating Commercialisation grant from the Australian federal government, VAPAR is now doubling down on its UK expansion.

As featured in AquaTech.

“United Utilities is always on the lookout for ways we can provide world class services to our customers. Using artificial intelligence to provide insights that can be actioned before issues arise is why we are interested in partnering with companies like VAPAR, who stand out because of their agility, technical skill and willingness to work collaboratively”

ChangeMaker 3D designs built environments that deliver value for society and leaves a lighter footPrint on our planet with the use of 3D printed technology. Their main aim is to provide cost-effective and thermal efficient social housing but they also saw the potential of 3D Concrete Printing for infrastructures. Their collaboration with United Utilities (UU) supports the pledge to be net-zero carbon by 2030 made by the water company.

During the lab, ChangeMaker 3D with the help of UU’s contractors developed a comprehensive use case that explored and proved the benefits of a Wastewater distribution chamber employing their “Printfrastructure” technology. (25% carbon reduction, 20% cost reduction, 55% programme enhancement and 50% labour reduction).

Following the programme, ChangerMaker 3D and United Utilities have extended their collaboration with the rollout and delivery of a full-scale 3D concrete printed water chamber for demonstration and testing. It is one of the UK’s first made-to-measure objects to be 3D printed from sustainable concrete. They have also been introduced to the Environment Agency (EA) to hear about their solutions and benefits.

As featured in 3D Printing Industry.

“The water sector could soon be the first in the UK able to print made-to-measure objects out of sustainable concrete on site.”

As one of the largest electric energy companies in the U.S., American Electric Power, delivers…

L Marks has been running innovation programmes with BMW in the UK, US and Japan since 2016

Drive is the innovation lab and startup accelerator from Belron, worldwide leaders in vehicle…