Hangar 51 set out to inspire, transform and innovate within IAG and the travel industry. It was created to demonstrate the art of the possible using emerging technologies, techniques, and partners to solve business challenges through applied research and innovation.

Dozens of early-stage and growth-stage companies have collaborated with Group brands including British Airways, Iberia, IAG Cargo and Avios, gaining access to IAG’s diverse customer base, expertise and venture capital, all with a view to propelling the airline industry forward and accelerating growth – for the Group and startups alike.

From 2016 to 2019, L Marks ran Hangar 51 for IAG before training the internal team within IAG to subsequently takeover the operations of the programme. Through our unrivalled expertise in scouting we, generated hundreds of applications from around the world and invited the most promising teams to pitch to senior IAG executives.

“Without question, Hangar 51 has improved IAG because it’s enabled us to sit down and work with people who operate at a different pace and in a different way. […] We’ve had to adapt to the way they do business and I think they’ve appreciated the way a larger organisation like IAG does business. In the end, working together has made us better, and I hope it has made them better as well.”

Over the years, 35 companies have been accelerated through Hangar 51 resulting in commercial successes for both the startups and IAG.  These include Zamna, Skylights, Assia, amongst others. 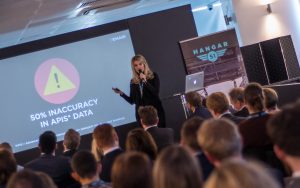 Zamna is built on a ‘privacy by design’ framework, which ensures that airlines and governments get accurate, trustworthy data in advance of a passenger travelling, enabling the traveller to get through the airport without multiple identity checks. The blockchain-powered data verification platform verifies and connects passenger data sets siloed between airlines, governments and security agencies to reduce the need for security checks.

Around 50% of customers make errors when submitting passenger information before their flights, which then have to be manually corrected at the airport. During Hangar 51, Zamna created and tested a prototype that automatically detects inaccuracies and enables corrections online.

In October 2019, Zamna secured a deal with IAG for airport security tech, confirming the corporate as its first commercial client. The aim was to automate the airport security checks between airports, airlines and governments, in order to reduce the need for manual checks by up to 90%, thus enabling huge savings.  In addition, IAG took an equity stake in the company as its first investment through its Hangar 51 Ventures vehicle.

Since then, as now the world’s first Biometric & Advance Passenger Information validation platform for airlines and governments, Zamna has raised further funding, secured partnerships with multiple airlines and become strategic partner to the International Air Transport Association (IATA) and an active member of IATA’s “One ID” working group.

SkyLights is a box office movie theatre in a comfortable pair of glasses. The team leverages cinematic VR to transport passengers to their own private in-flight movie theatre, where they can enjoy 2D, 3D and 180-degree content on a wide-angle cinema screen.
Within Hangar 51, SkyLights introduced British Airways to the concept of integrating cinematic headsets, including running multiple trials of their headsets with both in-flight and departure lounge settings. The team captured over 100 individual pieces of feedback, with a substantial majority of users giving highly positive reviews.

Since the program, SkyLights has continued to integrate their operations within British Airways successfully and has deployed the solution for first-class passengers travelling between London and New York.

Assaia trains neutral networks to understand and predict plane turnarounds. The features of this solution include more reliable and automated timestamps for every turnaround, alerts in case of hazardous situations and improved predictions of pushback times.
During Hangar 51, Assaia conducted trials and interviews with turnaround managers at Terminal 5 of London Heathrow Airport to demonstrate how their solution can accurately monitor the timestamping of plane turnaround to maximize safety and efficiency, whilst also reducing costs.

Following the completion of the program, Assaia established a commercial partnership with IAG and are implementing their solution in 3 stands across Heathrow Airport’s Terminal 5 building. Since Hangar 51, Assaia have also gone on to complete more than 40 projects globally.

Emu Analytics is a data visualisation software company. They work with IoT data and can subsequently use this to demonstrate how things, populations and patterns evolve over time. By designing a highly intuitive and engaging platform, the insights from collected data can be extracted and implemented with ease.

Upon completion of Hangar 51, Emu Analytics secured a commercial agreement to deploy their cloud-based Flo.w platform and install vehicle telematics devices on IAG Cargo’s ground fleet. Through ingesting thousands of data points a second, these have been turned into actionable and timely insights resulting in efficiency savings to IAG Cargo, reducing operational risk and improving results for their customers.